There’s lots of reasons why plants may die – old age, drought, the dog sat on it… But sometimes plants die for  no apparent reason… 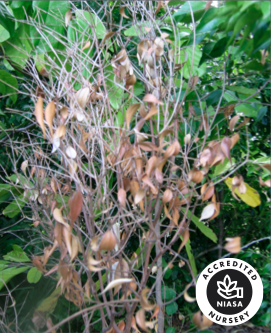 If this is the case, then the following should be considered.

When you buy Yuruga’s plants, the potting mix has long-life fertiliser in it, plenty to sustain the plant for the first couple of months, so please, don’t risk killing your plants by fertilising them while they’re still babies. Information Sheet No 5 has more information on this topic. 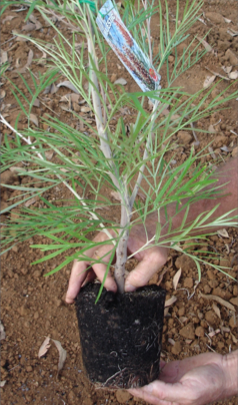 Root-rot disease is commonly caused by a fungus called Phytophthora which destroys the roots of plants. Since the most important function of roots is to absorb water, an infected plant wilts severely as if the ground is bone dry, even though the soil is quite moist. Once a plant exhibits these symptoms it is too late, and death is swift and inevitable.

A plant may be carrying root-rot disease for months or even years before it succumbs – like sickness in humans, it often takes some sort of stress or change for the disease to take hold. It is commonly seen during hot wet summers.

Root-rot fungus is, unfortunately, extremely common in plant nurseries. Most nurseries control it by spraying regularly with fungicides.

Unfortunately, fungicides suppress the disease but cannot eliminate it. It is therefore very common to buy apparently healthy plants which are carrying the fungus in the potting mix in the dormant spore stage. At some time later (weeks, months or even years) the spores will become active and the plants will die.

This is what the Nursery Accreditation Scheme is all about.

Accredited nurseries have production systems in place which ensure as far as possible that the plants you buy do not have root-rot diseases.

Basically, it is a matter of disease prevention (i.e. strict hygiene during production) rather than allowing the disease in and then trying to cure it with chemical sprays which don’t kill it anyway.

The information provided here on this Information Sheet is of a general nature only, and is not intended to provide specific advice about any individual’s specific situation.